Skip to content
Make A Donation
“The Church of Acts and the Combine Harvest!” by Chris Reed 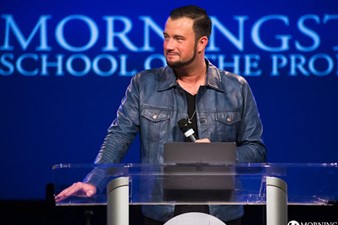 “The Church of Acts and the Combine Harvest!”

The following was adapted from a message delivered at the Advanced Prophetic Conference on August, 11, 2022, at 7:00 pm

While at our vacation condo on July 25, 2022, I had a face-to-face encounter with the Lord. I had been fasting, so I woke out of bed that morning and went straight to the living room. I sat down to begin my morning devotion before the rest of the family woke up, and without any expectation, I was instantly in Heaven. I was caught up before the Lord in a room full of dry erase boards filled with strategies. Then I turned to my right, and the Lord appeared to me face-to-face. I had such reverence, godly fear, and respect, yet I could feel love and holiness, like energy, emanating from Him.

He said to me, “Would you like to see My strategy?” I said, “Yes, please, Lord.” I was terrified. He showed me a safe with a combination lock. He entered the numbers “2-4-2” then had me open it. Inside was this little old scroll and on the scroll was written these words: “The Harvest Combine Acts 2:42.” He spoke those words and I wrote them down as soon as I came out of the encounter. He continued, “The Church Age will end the same way it began – in the house church. All these well-meaning strategies on these boards, which men have drawn and which you have been allowed to see, I am watching and examining. Yet all these strategies are supplemental to discipling the harvest. They will never replace it nor stand alone.”

He said, “The Church wants 2:43, but the key to accessing 2:43 is 2:42.” He continued: “In a time to come there will be persecution and disruption against corporate gatherings, just like in the beginning of Acts. But remember, the same persecution that kept the Church from large gatherings helped spread it from house to house, even throughout the known world.”

He said, “As you focus on winning and discipling souls, prophetic and spiritual gifts will increase to a new level that no one can oppose or deny.” He said, “As I look at the drawing boards and ideas of men, some are good and even inspired by Me, but none will replace the combine of grassroots evangelism.

Learn the Ways of the Combine

“The ‘combine for the harvest’ will include four separate harvesting operations – reaping, threshing, gathering, and winnowing – which will combine into a single process.” Then He said, “Learn the ways of the combine. For this combine will be completed in these future home gatherings with guidelines that will produce the koinonia fellowship necessary for gathering the harvest of souls and producing the mature, manifest sons of God in power who will usher in the reign of the Son of Man, who now speaks to you. I am the Lord of the harvest.” Then I was in my chair again.

The Lord said the combination or key to accessing 2:43 is Acts 2:42: “And they continued steadfastly in the apostles’ doctrine and fellowship, in the breaking of bread, and in prayers.” And just as the Lord’s harvest will combine four parts in one, there are four parts to Acts 2:42. The Lord said, everyone wants Acts 2:43: “Then fear came on every soul, and many wonders and signs were done through the apostles,” but the key to accessing 2:43 is Acts 2:42. 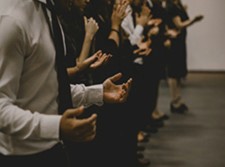 Now, the Lord made it abundantly clear to me He is not against large gatherings. MorningStar is a place to train, equip, and teach people to reign now and in the age to come. We must have large ministries to provide resources, oversight, and leadership, but the Lord said in the days to come, there would be persecution and disruption of large gatherings. COVID was a disruption. Many churches shut down. Some shut down for days, others for weeks, still others never reopened.

Just like in the early days of Acts when they went from house to house and there was real fellowship, connecting, and teaching, the Lord said this would happen again because of persecution and disruption. We will learn more about this, what it looks like, and how it can be implemented with order and structure in the days ahead. But ultimately, God has and is using ministry to the saints to produce the ministry of the saints.

Nothing will help us take ownership and responsibility for the Great Commission quite like inviting people into our homes for a meal, Bible study, and for creating opportunities for people to engage, and for the Lord to work in their lives.

We practice supernatural gifts on each other in the church, but if you read the Gospels, most of Jesus’ miracles and personal prophetic words happened at wells, on street corners, and in public places. What if we took church outside the large gatherings and took seriously our call to make disciples and preach the Gospel to every creature, baptizing them and teaching them to do all He commanded us?

I believe we can have anointed, appointed elders with a few people in their homes, and once they reach a certain number, they can spawn other groups. I believe in the next five years we can have at least 100 weekly or semiweekly house churches. We have already laid a foundation for this with our own groups at church.

We still need large gatherings for corporate worship and to receive from five-fold ministers, but they must no longer be seen as the primary place where ministry and godly experiences happen. We must start to see these as training grounds for ministry and no longer a place to come back to each week to get a shot in the arm, so we don’t get discouraged or backslide. The days of living Sunday to Sunday, conference to conference, just to remain afloat in the Kingdom are over. And if these large gatherings do not develop spiritual, emotional, and mental maturity in the saints for the work of the ministry, then we are wasting our time.

So, we will still have large gatherings, but the house churches will be the net. Jesus compared making disciples to being fishers of men. Nets are comprised of many small holes tied together for pulling in the greatest catch of all time. These house churches will be tied together under spiritual authority, yet free to teach, train, equip, and make disciples. The combine for the end-time harvest is to stay steadfast in the apostles’ teaching, fellowship, breaking of bread, and prayers, which will produce the fear of the Lord with signs and wonders. 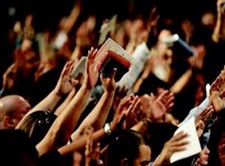 When this coming reformation, revolution, and unprecedented shaking comes, church buildings won’t be large enough to hold the crowds, and the Lord will not send a harvest for which we are not ready. We must have an infrastructure in place to hold them. Many want this spiritually intoxicating new wine God is pouring out in this hour, but to hold that new wine, we must have new wineskins. We cannot keep doing the same thing and expect different results. That is the definition of insanity. The end-time harvest of souls must become personal and real to us which will happen when we do it in homes. (Photo via Pixabay)

We must cast vision for what God is doing before another generation is lost and the promises of God are delayed yet again. If God can save a nation in a day, He can bring the end-time harvest in our generation.

Real ministry doesn’t happen by staring at the back of someone’s head, it happens when we sit near people, look in their faces, and connect with them. Digital technology has trained an entire generation to sit together without speaking. We are less present and less available today than ever, but very soon relationships will become the most important thing again. This four-in-one harvest combine is the one missing ingredient in most churches today.

Step one is to reap or gather the mature crop. Step two is to thresh or separate the grain from the chaff. Step three is to gather the grain after separation. Step four is to winnow or blow air on the grain to remove all remaining chaff. As we prepare for the end-time harvest, I believe another mighty wind of God will blow and break loose what is not part of God’s permanent Church. This will include the judgments of the Lord which will ultimately produce a pure harvest.

Likewise, step one in Acts is to continue steadfast in the apostles’ doctrine. This includes consistent daily life in God’s Word. Step two is koinonia fellowship which means partnership, participation, and communion. This includes confessing our faults one to another that we might be healed. Step three is breaking bread which includes eating and engaging with one another over a meal.

Something powerful happened on the road to Emmaus. After His resurrection, the Lord walked several miles with these two men, even preached Christ to them from the Scriptures, yet they still did not recognize Him. But something happened when they invited Him into the house. He took bread, blessed it, and broke it. Suddenly their eyes were opened; they realized it was the Lord, then He vanished from their sight. What if we start expecting visions, dreams, angelic visitations, and prophetic activations every time we sit and eat with our church family?

Step four is prayer. As the Lord told Rick Joyner during his fifteen-day visitation at the end of 2020, there is more prayer on Earth today than ever, yet most of it is temporal prayer for everyday things. What if, instead of praying for things we started praying the Psalms? The Psalms are unique in that they contain many other books of the Bible, including God’s dealings with men, God speaking to men, God conveying truth to men, and men speaking back to God. If we will pray and meditate daily in the Psalms and let God’s Word get in our hearts, this will open a whole new gateway of encounters with the Lord, and we will become like trees planted by the rivers of water that bring forth fruit in their season.